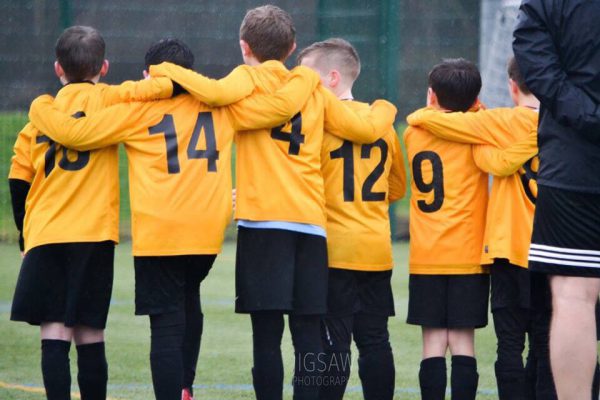 We arrived at the ground ready to go the team were relaxed and happy to be there just how it should be. After the warm up the teams lined up and were introduced to the divisional secretary Stephen Croxton and shook hands and lined up ready to go.

Kick off – so here we go the game the team had been waiting for, Hart started strongly with attack after attack but our defence held firm until a ball made it to our goalkeeper the hart striker slid in and collided with Joseph and the ball trickled into the net the team thought it was a foul but rather than complain they got on with the game.

The goal seemed to settle us down, suddenly Jake found some space on the right side of defence and passed it up the line to James who took a touch and crossed a lovely ball to Harry who met it on the volley to slot the ball just inside the post what a goal you could see the belief coming back to them even the divisional Secretary said that must be a goal of the season contender!

We now looked the better side trying to play our own game then from a corner the ball broke loose to Oscar who powered the ball through the crowded penalty box and into the corner what a time to score your first goal for the Eagles !!

The game was much more open now going from end to end Hart won a corner and put a lovely cross in which was met with a powerful header that hit the back of the net 2-2!!

Shortly after the referee blew for half time. The second half kicked off and we were much more settled but the game was pretty even with every player from both teams trying their best to find the next goal. Oscar put in a cross towards Harry the goalkeeper came to gather but due to the slippery conditions the ball slipped out of his hands and straight to Harry for his second of the game 3-2, we then looked the more dangerous team and one more goal would surely win it we mounted attack after attack James ran through and smashed the ball against the post, the midfield and striker (James,Zach,Jack,Ben,Joseph,Josh,Harry) were creating chances and the defence (Alyssa,Oscar,Jake) were holding firm and keeping Hart to minimal opportunity’s but if they did make it through Nathan was alert and ready to pounce on any loose ball to protect our goal.

We were now in the last few minutes and Hart were charging forward and putting as many players forward as they could for corners and free kicks and they were getting closer and closer!! Then a through ball made it through to Nathan and just like the Hart keeper the wet and slippery conditions caused the ball to break loose to a Hart striker who slotted the ball home 3-3! We kicked off and within a minute the final whistle was blown by the referee extra time beckoned.

The team were heartbroken at being so close to winning the game, but each and every player encouraged one another and to be honest at this stage they didn’t need the coaches as they were coaching each other and by the end of that few minutes the smiles were back along with a determined look on each of their faces.

This is a tough way for a game to be decided, Mark and I had an idea of the takers but we asked if any didn’t want to take one as no one would be asked to take one if they didn’t want to. We also took the opportunity to remind them that win or lose they had done amazing and we were all proud of them.

The team gathered ready…………… So here we go!!! Both teams scored, missed and goalkeepers made fine saves along with a retake but we found ourselves 3-2 with Hart ready to take their last penalty. The player hit his shot to Joseph’s right and he dived and smothered the ball there was a moment when everyone fell silent then everyone realised they had done it!!

The Eagles had won the Salver!! Both sets of coaches and players gathered and shook hands both losing and winning with grace which is testament to the players, coaches and parents all of which were a credit to their respective clubs. Both sets of players lined up to receive their well-deserved trophies, they had treated everyone in attendance to a fantastic game of football played in the right way and in the right spirit.

Alyssa stepped forward and lifted the trophy to show all of her teammates and to the crowd of parents, family and friends. What a game!!!! Words can’t say how proud we are of the whole team ! They have come on so much and developed both individually and as a team they have an amazing team ethic and totally deserve the moment of glory. Well done team!!!!! 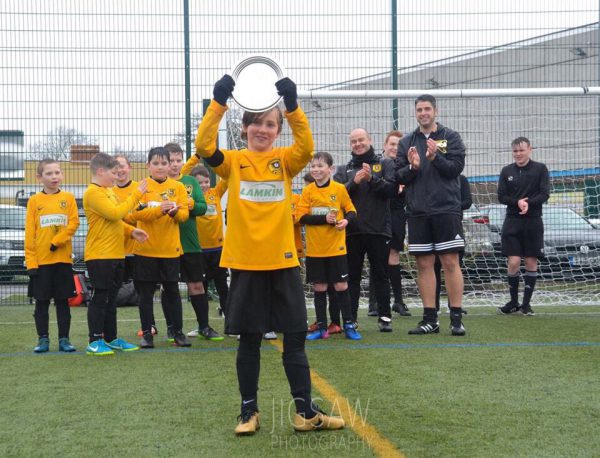